What Can Teenagers Teach Us? 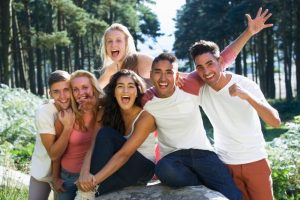 The other day, I had the honour of taking part in an ‘interview practice day’ at the local senior school.

I met with outstanding individuals, who were able to field even the most difficult questions with sensible and thoughtful responses.

These young people represent our future generation.  Bright and talented, each of them filled with hope and desire and passion.  Their ambition is to carve out a path for their adult selves.  A path where they are valued and valuable, contributing in their own unique way to society.

These individuals are powered by their values and there is a genuine desire in all of them to make a positive difference in their corner of the World.

This is the third year that I have had this opportunity and each time, I am humbled by the grace and willingness of teenagers I meet.

My first year of interviews and I had the unusual experience of interviewing a ‘goth’.  Or so she said.  In fact, she looked far from it to me.  She was smartly dressed in a suit and wore sensible makeup, only betrayed by the fact that she approached my desk entirely without a smile – this being the only nod to her chosen identity.  We talked and she responded in a guarded fashion for a while and to be honest, it was a bit tricky to get much out of her at all.

I decided to ask about her hobbies.  This was when she shared her goth status with me.  I was interested to hear what it entailed.  She described her friends and the fact that they love nothing more than to attend special conventions in London.

As she chatted, she began to smile broadly and became engaging, a pleasure to speak to.  Then, with absolute unfettered delight she exclaimed “…and the best bit is the free hugs!”  “Free hugs?” I enquired, “What do you mean?”  The girl explained that there are several people at these conventions offering free hugs to anyone who wants one.

This was a very profound moment for me.  I had been invited in, briefly, to her world.  The one filled with love and camaraderie different to my own experience.  An unconditional acceptance between people brought together by their shared identity.

We went on to chat easily about her ambition to become a graphic designer and her passion for the subject.

At the end of the interview, the girl and I shook hands and this triggered the return of the mask.  Her smile once again gone, she walked away.  A goth in a suit.  And as I watched her leave I felt privileged.

That encounter gave me an insight rarely allowed and brought home to me so powerfully the human need that we all have inside us for acceptance and unconditional love, whatever identity we choose for ourselves, or circles we mix in.  She touched my heart.

Year 2 and again, I met outstanding teenagers, all doing their best and once again, opening themselves up to scrutiny and critique.  Laying themselves bare to the judgement of older, more experienced, (but not necessarily wiser) adults.

One girl stood out particularly.  Her trial interview was for a job in fashion.  When I asked about her interest, she said she had her own blog, which she used as the vehicle to share her fashion tips.  She already had over 300 followers.  Forward thinking for a school-girl in 2012.

This year, probably because of my own personal focus specifically over recent years, I was struck by the integrity of these young people.   And what I came away with has given me an even more urgent and determined impetus in my work.

Every young person I interviewed, as with each year beforehand, demonstrated a very clear and strong set of values.  They are respectful, committed and loyal.  They are interested in contributing to society in a positive way.  They measure their success and fulfilment by their ability to do a good job, whilst remaining firmly aligned to their values.

At one point during the day, I interviewed a boy interested in dentistry, so his practise interview was for the post of trainee dentist.  He showed great promise, was eloquent and very interested in the patient experience.  He described a day’s experience he’d spent recently shadowing a dentist at work.  In the feedback, however, he said he wasn’t entirely sure that he wanted to be a dentist, he might go into medicine instead.

I explained that in an interview, he should show the interviewer that this is the job he’s absolutely committed to and passionate about over and above any other.  His response?  “But that wouldn’t be true.”  I paused for a moment and then said to the boy.  “Integrity is important to you, is there another way to show your passion without compromising your values?”  Together, we came up with a solution.  He discovered that as a dentist, his  passion would be in giving people confidence through having a smile to be proud of.  This is his truth and he can be both passionate and congruent at the same time.

I am privileged in my work.  I am a communications specialist.  I observe people’s behaviour.  And I see it when a person’s values are compromised.  They feel it.  They feel the immediate stress and discomfort of their own misalignment and it creates both a physical and emotional reaction that is visible.

Yet, in the workplace, how many leaders, managers, colleagues take the time to look out for the misalignment of values?  How often are people told to do things that they feel personally uncomfortable about?

I believe that there is a spectrum.  At one end of the spectrum, we use language that can be misinterpreted.  As with my initial suggestion to the boy that it would serve him well to show his focus and commitment to the role of dentist.  Yet, how many leaders in business take the time to uncover what their staff are feeling and adjust their language accordingly?

At the other end of the spectrum, after years of overriding values again and again, we no longer know or care what our values are.  Hector Sants, Chief Exec at the then FSA during the banking crisis said in his Mansion House speech in October 2010:

“…It is crucial that we improve behaviours and judgements.  To do this we must address the role that culture and ethics play in shaping these.

“I believe that until this issue is addressed we will not be able to prevent another crisis of this magnitude from occurring again, and will never fully restore the trust of society in the financial system.”

Hector Sants and his team determined that years of erosion of values had occurred in the name of commercial success, to the point that in the financial sector at least, ethics had become a secondary concern in some organisations.  The consequences of which are still being felt across the globe several years on.

Just like an addiction, drink, drugs, gambling, food, sex, money – our bodies start out trying to tell us that we’ve had enough.  We get physical symptoms, we feel stressed, depressed, hungover, uncomfortable, anxious, sad, empty, alone.  Yet, rather than listening to our body, we press the override button for another ‘hit’ to make us feel better.  And we press it again, and again and again…  Eventually, our body no longer knows if it’s had too much or not enough, it is just in a permanent state of stress and wanting

We are, in the main, bringing up our young people to respect values and to act in alignment with their own.  Yet as adults, too many of us trample over our own values and the values of others on a daily basis, both at work and at home.

If asked, many adults would find it hard to articulate what their values even are, because so little attention is paid to them.  Indeed, if it wasn’t for bodies giving us physical and emotional symptoms, we would be none the wiser.  Yet, whether we know it or not, when we go against our beliefs and our values, we feel pain and so do our children.

That said, there is nothing more empowering than to come back into alignment with oneself.  It brings with it a clarity of purpose and freedom that can’t be found anywhere else and it is easier than one might imagine.

This site uses Akismet to reduce spam. Learn how your comment data is processed.